It’s been one of the goals of our Kolín festival to provide a platform for blues, blues rock and Southern rock musicians to meet and, in a sense, confront their peers from other bands dealing in our beloved aforementioned genres.

Above all, however, the event is to be enjoyed by the large community of fans. In contrast to last year’s 10th anniversary festival focusing mostly on Southern rock, this year’s visitors were able to relish various forms of the blues. Skinny Molly was to have played the role of the event’s essential Southern rock outfit but, as the American band had cancelled their entire European tour, the hard rock SoundtrucK combo of Greece claimed that mantle instead.

Without a doubt, the festival found its brightest star in the Dutch Leif De Leeuw Band. The troupe got quite literally the entire Kolín audience up on their feet with both their original songs and covers (mostly by The Allman Brothers Band) performed in their own arrangements featuring moments of sweet surprise. They did all of this with professional technical ability, effortless ease, and the joy of a job well done. Just a blast!

Before Christmas time I have promised all visitors of our festival and also our website and FB page a gift – revelation of the lineup of Southern Rock & Blues Kolín 2022 festival. Then things went complicated, new year break has passed, and I wasn’t able to catch up. Sorry for that, and here’s finally the gift.
Next festival will take place on Saturday 21.5.2022, again, just like first nine years, at Karlovo náměstí (Charles Place), and in nearby MSD Kolín (City Music Hall). Although all of us loved the Kmoch Island atmosphere last year, for just one day festival it would be too complicated and expensive to keep this venue.
In contradiction with our original plans, we had to make significant change in the lineup. US-based band Skinny Molly has cancelled the whole European tour, so they are not going to headline our festival. As a replacement, we have contracted new band that will probably have its live premiere. This band consists of experienced blues and rock fighters and has been named Holeček & Marcel Project. On April 8, the band will release its first album. You can watch their promo video by clicking band name in the program below.
So you can look forward for the following artists: 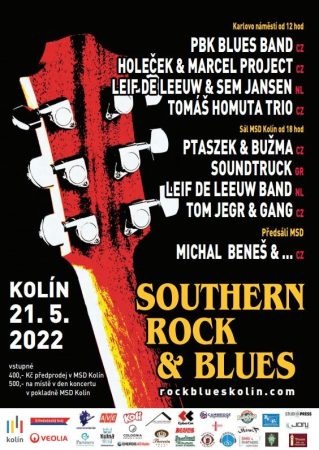 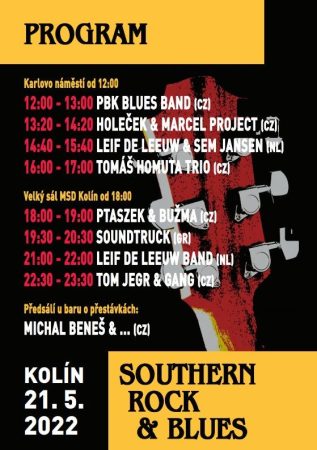